Lone Swordsman was a sidescrolling 2.5D hack-n’-slash game developed by the 8-man team Mecha Gecko in our first year of university. We had large problems with the programming/programmer and the game was also quite over-scoped, so the game never came together in engine. However, a lot of the assets and systems made for it it was of good quality.

The story revolved around the titular nameless swordsman, who has wandered aimlessly from realm to realm for many years, honing his skills and piecing together his equipment from whatever materials he found, now guided back to his home by a strange voice in his head. There he is beckoned by an ancient goddess to free her from her prison, and sets out again through the realms of existence, meeting various characters and numerous enemies on his way.

My work on the game was two-fold: I worked with the other designer in the team to design the main gameplay and combat, balancing the sub-systems (passive upgrades to your sword, modifiers in the form of runes, unlockable special moves etc.), and designing 5 levels and the enemies in them; I also did some art work (a mock screenshot of the game in action and the main menu background image), made the user interface, assisted the artist in turning the art for the first level (two >10000 pixels wide .psd files) into smaller-size images that could be parallaxed and used in engine without distortion and compression, in addition to going through the level’s whitebox with him and figuring out what it should look like.

The game had you attack and dash with the left and right mouse button respectively, with the ability to aim both with the mouse and movement using WASD. Every time you hit an enemy, you would get a higher combo count until you got hit which would end the combo. This combo count would unlock special abilities (gained throughout the game) and the higher it was, the further you could dash. While dash was generally limited by the stamina meter, killing an enemy would replenish it to full, in an attempt to make the combat fast and accurate, enabling the player to zip from one side of the screen to the other very quickly (as long as they don’t mess up). You could also hold down the attack button to make the attack affect an area (for fighting multiple enemies generally), and attacking right after dashing would result in an extra powerful attack. Any time you attack or dash, the game slows down for just a moment so that you can aim without being punished and also not be disoriented as you are displaced quite suddenly.

Cover showing the final design for the main character. 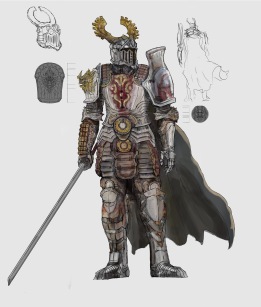 One of many main character concepts. 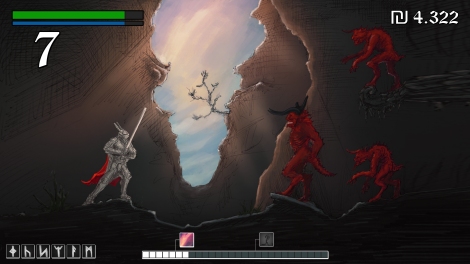 Documents containing some of the design for enemies and systems in the game.