Time limits in games are a fairly common way to push the player away from degenerative strategies (kiting, farming, camping etc.), and extending it to puzzle games with a move limit seems like it might be beneficial as well. After playing a few games that rely on this concept, however, I find that a soft turn limit (i.e. you’re allowed to continue, like when there’s a displayed par score) is at best a distraction (you could introduce pars to all kinds of puzzle games and they wouldn’t magically get worse) but at worst a crutch for bad and lazy puzzle design. I’ve never been a fan of it, but it was particularly playing TaniNani and Sync 3D that made me realize why.

To establish some common ground and goal, the main thing I look for in puzzle games is truth, which is hard to pin down concretely. Jonathan Blow has two lectures on the matter: Designing to Reveal the Nature of the Universe (w/ Marc Ten Bosch) and Truth In Game Design. Essentially the goal is to construct rules that are as simple as possible while allowing for the deepest consequences possible, which is utilized by the puzzle design which challenges you to realize universal truths. Much of good puzzle design and writing/videos on the topic concerns itself not with the particulars of truth, as that’s more inherent to the rules and not something to manipulate directly, but how well the puzzle design does justice or injustice to those rules. E.g. the entirety of ElectronDance’s Ouroboros Sequence (like Monte Carlo and the implications of an undo option on trial and error playstyles), Matthew VanDevander’s Dos and Don’ts of Honest Puzzle Game Design which tackles conciseness and filler among many other topics, and Mark Brown’s What Makes a Good Puzzle? which is largely concerned with pacing and presentation. For this article, I’m not too concerned with the truth of games like TaniNani or Sync 3D, but rather how effectively they convey those truths to the player (or fail to do so) as a result of turn limits.

There are two different outcomes for a soft turn limit like a par score: optimizing a known solution, and clarifying an intended solution with several distinct alternatives. The first case is simple: the solution I naturally arrived at without considering turn count, but refined in a straight forward manner to cut the unnecessary moves. There’s no more truth revealed here, it’s fundamentally the same solution and acts similarly to an execution element (found to varying degrees in puzzle platformers and 3D puzzlers, acting as a barrier that can cause tedium and make undos less convenient (not strictly bad, see Monte Carlo)). Optimally, the puzzle should end the moment the player knows the solution in their mind, so if there’s no further truth to be found in optimizing the one solution, you should not push the player to go through that process. On its own, this is more of a distraction though, and you can simply ignore the par turn count if this was the only impact the mechanic had.

Then there’s the puzzles that have multiple distinct solutions, and the designer wants to push you towards finding the best one. There are a couple of issues on the developer side: if you designed a puzzle first and then gave it a par number, the fastest strategy is not bound to be the one with the truth most clearly conveyed; additionally, if you already know the solution you want the player to experience, it’s straight up lazy to rely on a number to incentivize the player instead of designing a puzzle that inherently pushes players to find this solution. Look at The Flames for example, a brilliant little puzzlescript game where there’s a dynamic, integrated turn limit with the blocks burning up. 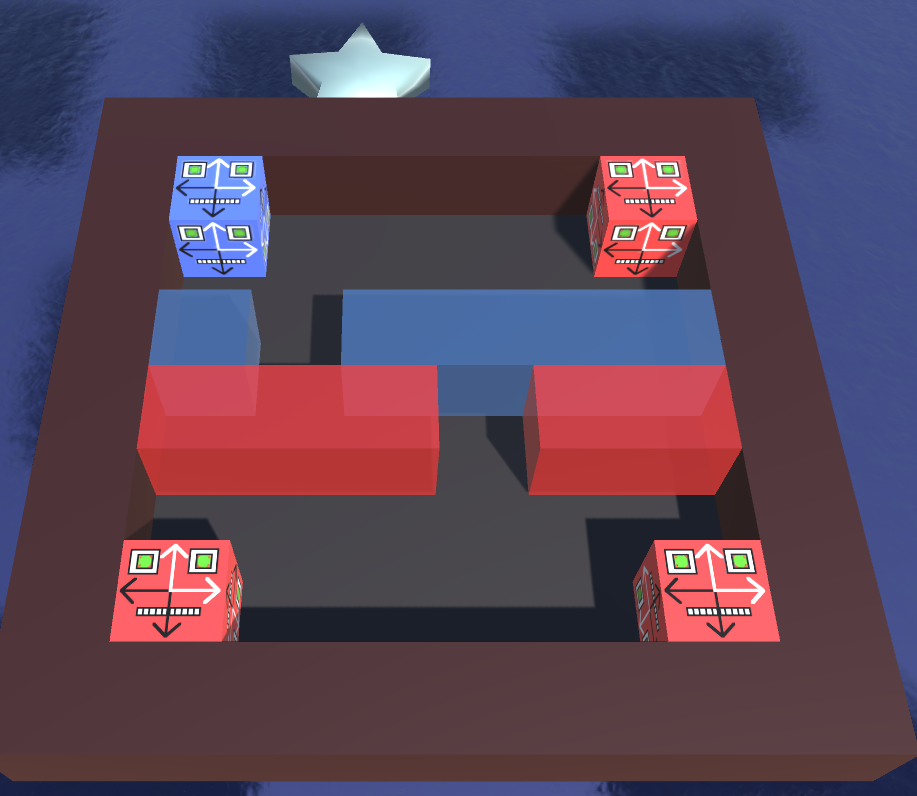 What is more relevant to a player, and critic, however, is that an external time limit makes for an unintuitive challenge. Take for example the above puzzle in Sync 3D. It’s extremely easy to solve given the phyisical restrictions of the colored walls. But doing it in 11 moves? There’s no paths to rule out, no tangible restrictions to apply to the puzzle. There’s no sense of pacing or direction, just a wild open space for you to get lost in and stumble upon the solution, as I did. That solution does hold more truth, but it’s conveyed very poorly and in a way that incentivizes trial and error / Monte Carlo playstyles.

Compare this to Jelly no Puzzle’s final puzzle (spoilers) which I finished recently. Through messing around with trying to get the different colored jellies together, you’ll find out that you need to get another red jelly up to the two spaces under the one that’s nailed to the roof, but that’s physically impossible (intuitively so) since you can’t get past the black blocks and can’t move jellies upwards – oh, but you can move upwards, by using the patch that spawns a jelly underneath one of corresponding color (here, yellow). It’s not solved solely from that, but figuring out that there’s a physical restriction that makes the goal impossible given one line of thinking, opens you up to realizing the path that lets you bypass those restrictions. You gain an understanding of the puzzle, and then act on that – no flukes or Monte Carlo mentality accommodated. By relying on a turn counter to push players towards the interesting solutions, these games forgo all this information that guides the player to the truth and lets them eliminate impossible strategies, and end up with cluttered, confusing puzzles. Without getting the par time, it can be impossible to tell whether getting the level within that turn limit will reveal some greater truth or if it’s just busiwork and optimization, which means what could otherwise be just a distraction becomes a core flaw. You could also have a hard turn limit where you reset if you go above the par, which obviously becomes even worse as you force the player to go through the optimization process even when it’s clear to them it won’t yield interesting results.

I want to emphasize that I really like multiple solutions in puzzle games, I remember learning of two additional ways to solve a VEXT EDIT level from what I had done and it’s so cool to see the greater truth there, the complexity of the rules producing more outcomes than I knew of even after finishing the game. Portal 1 has a pretty big possibility space and a great speedrun and replayability as a result. Problem solving games, like those of Zachtronics, are more akin to traditional games with a spectrum of win states that perform to varying degrees across different axes like space and resources used. What annoys me about turn limits in logic puzzlers is is that it works against the core tenet of concise, clearly communicated truth.

I got halfway in Sync 3D, with 15% of solutions being on par. IIRC I did most of 4 worlds in Tani Nani, though that game isn’t as relevant (not all levels have a par, there’s a variety of sub-goals, and it’s a puzzle platformer so there’s an execution element which makes it trickier to simply design puzzles around those restrictions). I completed the rest of the games mentioned, and haven’t played any other major puzzle games with a par count.