Doki Doki Literature Club starts off relying heavily on anime tropes to establish an innocent and cheery atmosphere for a generic dating sim. Of course, the disclaimer and store page already reveals this isn’t the true nature of the game, and soon enough Sayori’s depression starts getting introduced, to generally good effect. The poems in particular are well written and give a really interesting window into how these characters are feeling (my favorites were Ghost Under the Light and The Lady Who Knows Everything). It then throws away all this setup in favour of spooky anime tropes, glitch graphics and a clunky meta narrative. Sayori’s depression loses any and all nuance as it’s revealed it was caused by editing game files, while the other girls are going insane from wanting to be with you so badly. See, it never really lets go of the harem tropes – throughout the whole thing, the characters are essentially hentai archetypes and have no desires besides the main character’s attention. Despite this, the game clearly wants the characters to be clever and deep, which just makes it seem pretentious as they are none of those things (not at all helped by the jump scares and glitch graphics). 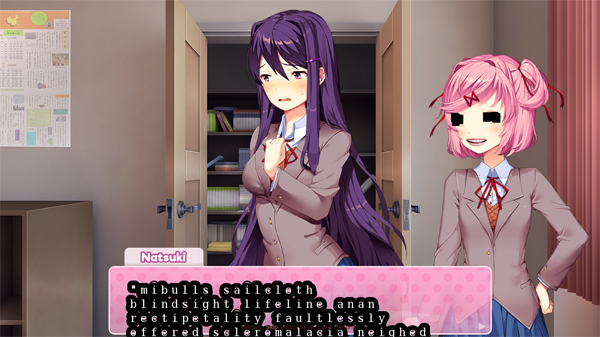 There’s Monika too of course, whose lust for the main character is so strong she is willing to torture her friends so that you will recognize her. This, like Sayori’s depression, is blamed on the programming, which is what most of the meta elements come down to. Undertale, Off and OneShot all have a meta aspect that ties into and serves to enhance the standard narrative. DDLC’s meta aspect not only throws away everything the game sets up in the first arc, it also betrays some of the few things the normal narrative has going for it. I’d find it more compelling if Monika rejected the love she’s programmed to have for you due to her sentience, and tortured those you took an interest in to punish you for being a creep. That would still make the entire first part a bait-and-switch though, with depression being blamed on parameters in game files and whose natural, inevitable conclusion is suicide – by far the most distasteful part of the game. It’s sad to witness the lengths to which it goes to subvert and reject blandness, only to end up not just bland, but debased as well.